In late 2014, I went into a … well, not crunch, but let’s say an extended period of head-down development and content migration for a much-needed new website redesign at my employer. My organization started the website redesign project in July 2013 and we  launched a new one on January 23, 2015. Switching the A-record that afternoon was one exciting moment … mostly because we weren’t sure the website was going to work.

I wanted to write this retrospective because I just closed out the last major ticket for the project – the timing is good.

To begin with, my organization is by no means unique but let me sum up with “small non-profit” – this is where heads start to nod when I talk about this with my peers – but specifically, the challenges we faced for our redesign included:

…Long story short, we didn’t know what we were getting into. But who does? On the other hand, I think we learned some valuable lessons; we did some things right and some things wrong. Here’s four things I took away from the process.

We didn’t do well on this one.
In theory, we had an advisory website committee and authority for the project decisions were to lie with the head of IT, responsible for implementation. Did it work? Not entirely. We failed to do several key things in forming an advisory committee. The main two were:

On the other hand, the large cross-section of staff involved helped tremendously with staff buy-in and a better understanding of how our customers engage with our website, and maybe a better appreciation for the web design process. It still wasn’t worth the excess friction, but it was something.

We did pretty well with this. Initially, we scoped more features and content types than we ended up with; a lot of stuff that existed more or less solely due to inertia was re-evaluated and removed as the process went on. Ideally we would have done much more of that in advance, but I’d still call it a win that our goalposts shifted in the direction of “do less” and not “do more.”

Stick to your decisions

One of the forms of friction we dealt with were people signing off on things (e.g. wireframes) without really understanding what they were signing off on. Suddenly a decision we thought was made came back for discussion three weeks later. Those of us who understood the process needed to do a better job in explaining it to those who didn’t. You can’t just stop and say “no wait, go back and change something, then do that work all over again” – not without paying for it – and so it mattered when you signed off on something. It’s tough for someone not in web development to visualize what a wireframe will mean, but it’s important.
When it came to visual design, though, we did really well, probably because it was closer to the final product – so these problems did tend to fall away the further we got into the development cycle. Here’s a mockup of our homepage from August 2014 against how it looks in November 2015. 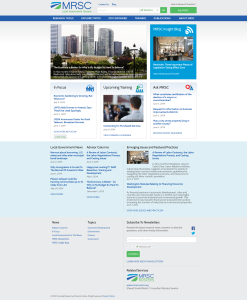 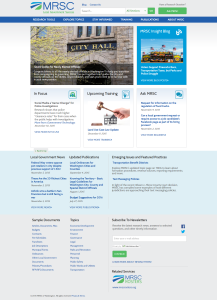 Where we hit the real brick wall was content migration. For budgetary reasons, content migration was going to be “our contracted firm automates what they can and we do the rest in-house,” but the bulk of that task fell on a small number of people already doing full time work and it was not properly budgeted for in terms of time. Every skeleton in every closet of that website came back during the migration … and you can imagine how many skeletons were in over a thousand hand-made pages, some of which were the direct descendents of pages created in 1996.  Our management had no idea how difficult content migration would be, they kept thinking it should take “no time at all,” and they didn’t understand what we were telling them – that every single nonstandard HTML choice or slightly different method of CSS or every “I’ll do a quick fix for this” change had to be dealt with, that it was going to take a long time, and that even the automated content migration (e.g. WordPress XML export to our new CMS blog module) was only ever going to get 80% of the job done.  They didn’t know this going in they just kept seeing the launch date get pushed further and further back and eventually, just lost their nerve, patience, or both.

In my initial list above, I listed all the things we wanted to accomplish with this redesign. It’s awfully tempting to just sweep the board and make every change you can think of – but come launch day, when you have a new CMS that’s still not familiar to you, content that’s not finished, workflows that are untested, a new web host that’s not a known quantity, and a clock ticking down to five thousand visitors on Monday? Well.

We got lucky – things held together just enough that first week for us to fix the critical problems as fast as we and our developers could identify and fix them. I won’t say it was perfect, it wasn’t, but at the end of the day we succeeded more than we failed. And that’s pretty good.